At a meeting of Bromley Council’s Development Control Committee in January, Councillors voted to allow planning permission for a new Endoscopy Unit at the Princess Royal University (PRU) hospital.

Local Conservatives have criticised Labour’s record at City Hall after new figures revealed the Mayor of London has hiked Council Tax by 57% since he was elected in 2016, compared to Boris Johnsons record of cutting Council Tax during his term.

Member of Parliament for Beckenham, Bob Stewart, has called on the Labour Mayor of London, Sadiq Khan, to drop his plans to extend the so-called Ultra Low Emission Zone to Outer London. The follows confirmation from the Mayor of London that he will go ahead with the extension from August 2023 – despite huge opposition during the public consultation.

Bob Stewart welcomes news of 3,109 extra police officers for the Met Police thanks to Conservative Government

Member of Parliament for Beckenham, Bob Stewart, has welcomed the announcement that 3,109 police officers have been recruited for the Metropolitan Police since September 2019.

Beckenham's Member of Parliament, Bob Stewart, has welcomed the news that Southeastern will be reinstating the London Blackfriars Service from Beckenham Junction from the 11th December.

Beckenham Member of Parliament, Bob Stewart, is campaigning to have the Bakerloo line extended to Beckenham Junction claiming the move would bring new investment and jobs to the town as well boosting capacity on at the busy station. 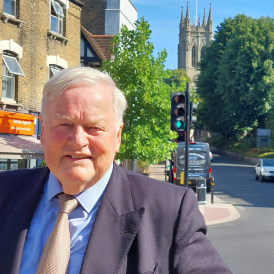