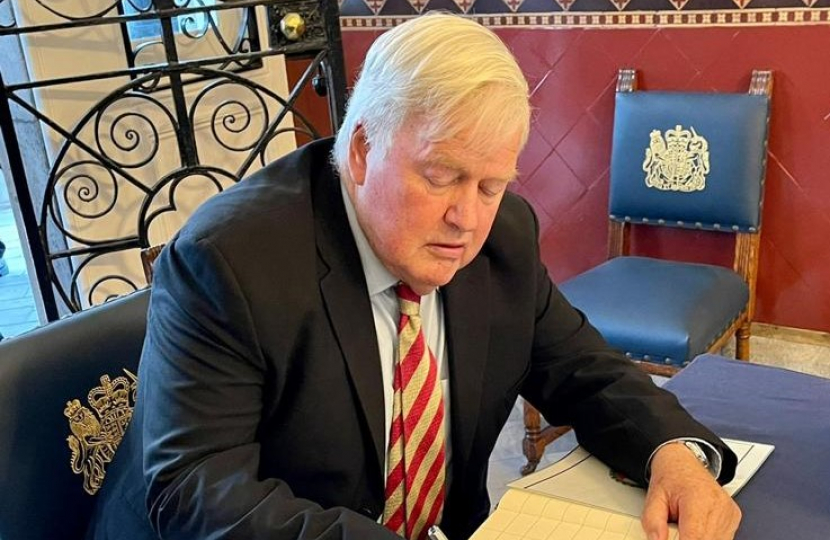 Local politicians from across the Beckenham constituency have marked the sad passing of Her Majesty Queen Elizabeth II.

Responding to the devastating news on Twitter, Bob said:

“I met Her Majesty twice in my life and was awestruck.  We have been blessed to have had her.  God save her and God save The King.”

Following the news on Thursday afternoon, a moment of silence was held at Bromley Civic Centre attended by London Assembly Member Peter Fortune, Councillor Adam Grant and Councillor Thomas Turrell (who represented MP Bob Stewart).  A book of condolence is available to sign at the Civic Centre and at Beckenham library.

Bob Stewart signed the Book of Condolences to Her Majesty the Late Queen in the Governor's Residence, Gibraltar. As Secretary of the Parliamentary Gibraltar Group he was there for Gibraltar National Day which is now cancelled.  Bob was wearing his regimental tie as His Majesty King Charles III is Colonel in Chief of Bob's Regiment, the Mercians. Later on Friday Bob attended the 96-gun Royal Salute to Her Late Majesty in Gibraltar Naval Base.

On Sunday, Councillors and Bob Stewart attended special church services which her held across the constituency to celebrate the late Queens life. Later on Sunday Bob joined Councillors at the Civic Centre for the local proclamation ceremony of King Charles III.