Conservative members in Beckenham have chosen Carline Deal, Councillor Michael Tickner and Councillor Stephen Wells as the Conservative candidates for the new Beckenham Town & Copers Cope ward ahead of next year's local elections.

The new ward replaces the existing Copers Cope ward, with the boundary between Copers Cope and Kelsey and Eden Park wards moved from the immediate High Street area to include Manor Road, Kelsey Park Road and Court Downs Road. Residents to the East of Scotts Lane, such as the Groves will move from Copers Cope to the new and bigger Shortlands & Park Langley ward.

Carline Deal, a local campaigner, joins the team in the place of Councillor Russell Mellor, who is currently Mayor of Bromley and will be stepping down at the election. Carline is a Beckenham resident, owning two local businesses and serving as a School Governor in the town. Michael Tickner continues as a long standing Beckenham Councillor with wide experience, including a spell as Leader of Bromley Council. Stephen Wells has represented Copers Cope ward since 2010 and served as Deputy Mayor of Bromley last year.

The team will continue to hold their monthly street surgery on Thornton’s Corner (at the traffic lights) on Beckenham High Street on the first Saturday of each month between 10.30am and 12.30pm. All are welcome to come and chat to them there.

Speaking on behalf of the team, Michael Tickner said:

"We are all very honoured to have been chosen from a shortlist of 7 as the 3 Conservative Candidates for Beckenham Town and Copers Cope. Stephen and I look forward to working with Carline and making a positive case for returning us to the town hall.

“Whether it has been securing investment for the high street or getting action to tackle anti-social behaviour, we have been fighting hard for Beckenham and will be keen to win every vote at the election in May. Beckenham needs a strong voice at Bromley Civic Centre and with local support we can continue to provide good sensible local government." 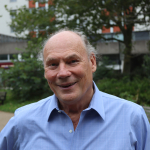